It is our last day on the Tasmanian Trail. We were looking forward to a needy rest for our sore tired bodies.

Once again, the weather was kind to us. Eight days in a row! We couldn’t believe it and acknowledged many times amongst ourselves how exceptionally lucky we had been.

We got an early start than normal that morning and headed South on the Huon Highway.

We then turned right where a group of school kids were waiting for their bus. They all took interest in our bikes and one of them yelled out “push harder!”. I’m not sure they knew about our previous days of riding.

We soon turned off onto a gravel road where altitude gain was needed again. Our leg muscles were very tight so we just meandered slowly to ease into it.

As we climbed we saw another black cocatoo. Throughout the Tasmanian Trail we saw many yellow tailed black cocatoos. They’re a large cocatoo native to South-East Australia measuring 55 to 65 centimetres in length. Their loud eerie wailing calls carried for long distances.

The gradient was kind. We enjoyed the weather and took it easy.

We then descended into lush fern gullies. The route today was very undulating.

The terrain opened up before ascending again. 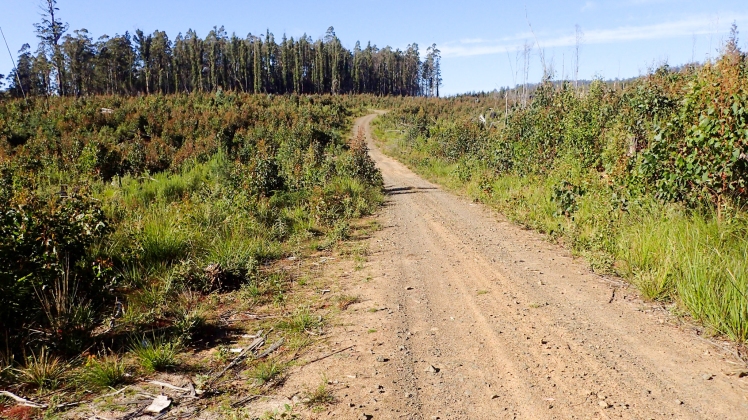 Then down again into another lovely gully full of ferns, antarctic myrtles and sassafras. 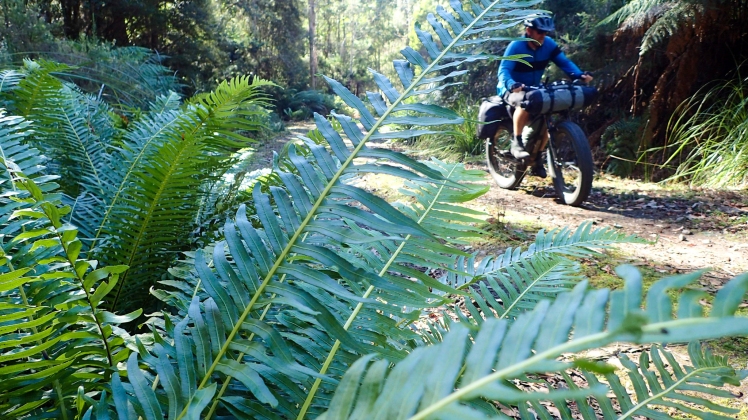 Then up again where we stopped for some early lunch. Eric enjoyed a seat on this big old tree stump.

Today Darb had planned for us to visit the Esperance River camp so we turned off and rolled down some long fast descents.

We rolled over a bridge at the Esperance River and stopped to admire the flowing water. We then proceeded to the camp ground facilities to the right of the bridge. The facilities here were very good with a shelter and tables etc. We stopped for a good break and enjoyed some hot drinks. I also had a kip. 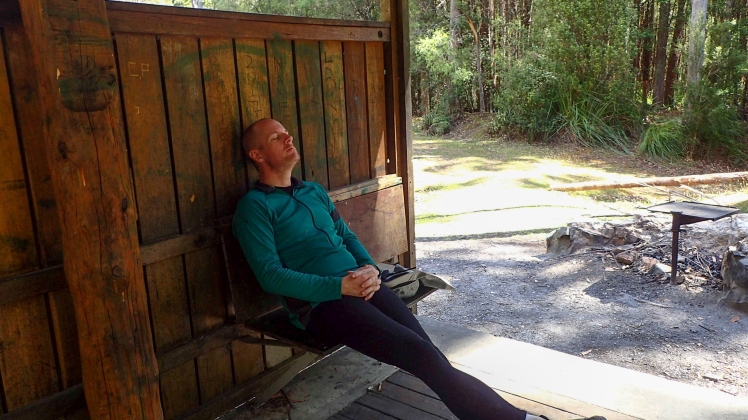 We then went down and filled up our water bottles for the final leg to Dover. We still had a bit of climbing to do, so the fresh water and rest was invigorating. 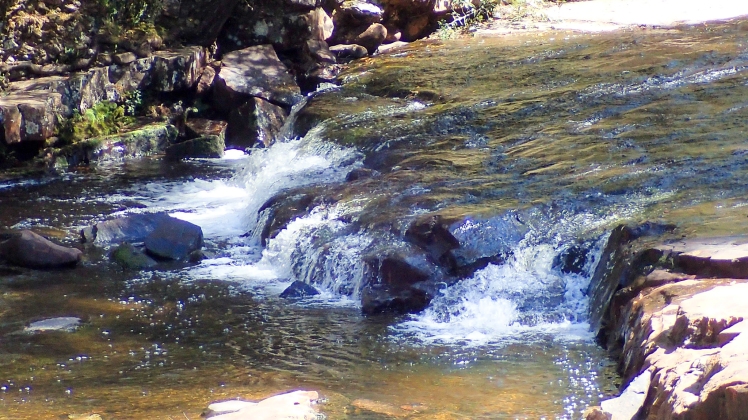 We returned back over the bridge and pedalled towards Dover. The trail was coming to an end, the feelings of achievement were prematurely entering my mind.

We had a bit of climbing to do still though, before a nice long descent to Dover. The top of this climb had a few false summits. It was like the trail was testing our bodies and just kept going up, very steep at times.

At one point my sore knee tendons suddenly decided to cramp on me. The pain was intense! Nearly floored me. I couldn’t believe I had come so far for the knee to finally bite bad again. Luckily a long muscle stretch calmed it down and pedalling was the next best medicine. 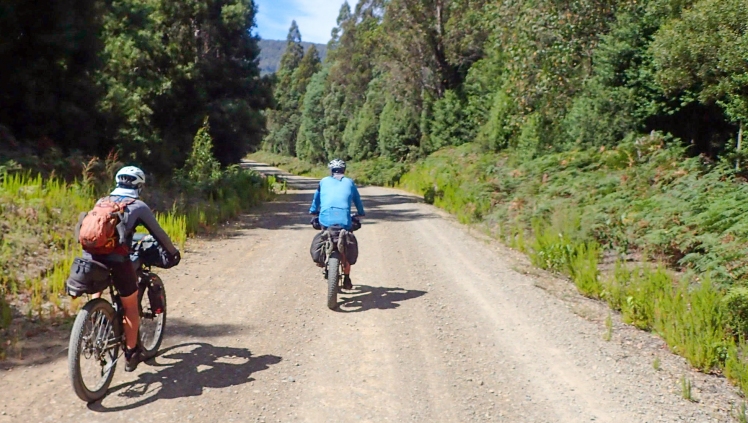 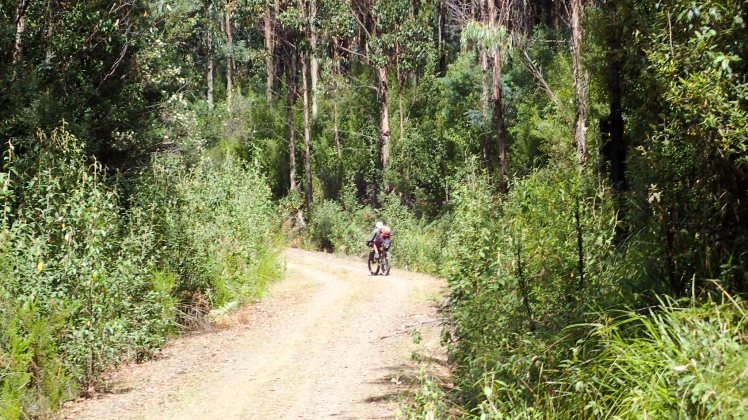 At one stage we were starting to roll downhill again when Darb quickly manoeuvred his bike. I was behind him and just thought he was dodging a rock, however Eric yelled back to me warning of a snake, I only just saw it in time. Later on Tim and Bec told us they saw a snake in the same spot and Tim was able to get a photo of it. We believe the snake is a tiger and it was about one metre in length. We were glad to avoid it!

Then we finally reached the top and got our first hint of the sea! We almost celebrated. 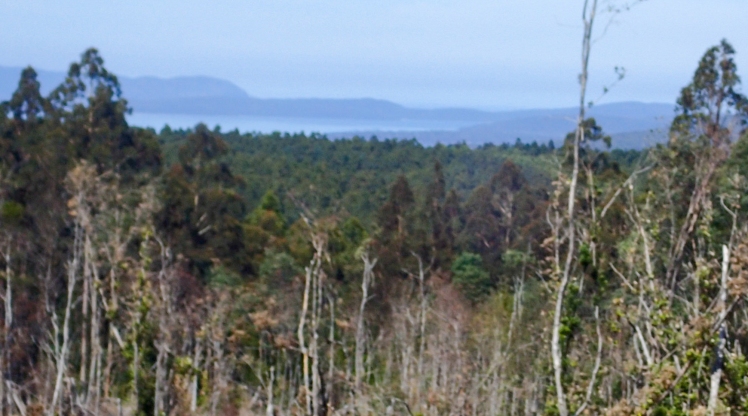 Just as we cruised along the summit, a mountain biker came the other way towards us. It was nice to see another rider on the trail. We had a good chat with Brendan. Brendan lived in Dover near the end of the trail and was out doing a big day ride.

We said our goodbyes and began a fun gentle roll downhill washing off 350 metres of elevation gain. It was an awesome feeling knowing we were rolling down to the end of our 8 day epic trip.

Click here for a short video of part of the descent. 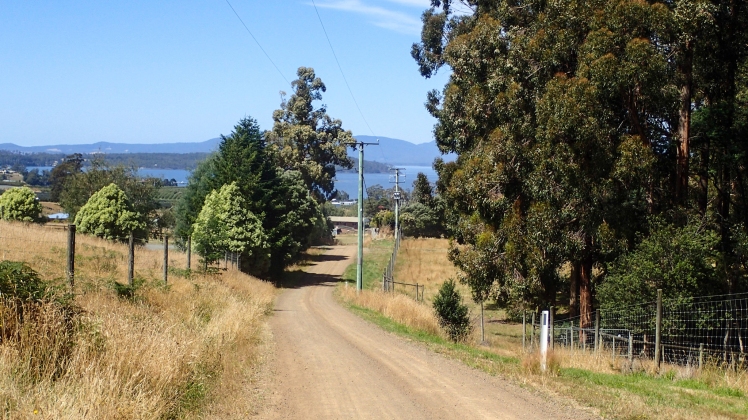 We made it! Woohoo!

So we stopped at the official Tasmanian Trail sign for the obligatory photo. We then proceeded to the local shops for some celebration refreshments.

Soon after this I received a message from Bec and Tim, they had worked out who we were and found my profile on Facebook. Tim and Bec had beaten us to Dover! Top effort guys. Later we concluded they missed us when we diverted to the Esperance River.

So we organised to meet Bec and Tim and have dinner together at the local RSL. Unfortunately Darb was a little sick and had to rest back at the accommodation. It was really amazing to meet Bec and Tim straight after they followed our tyre treads all that way. We learnt that the locals at each town tipped them off about us and identifed us by the green tyres on my mountain bike. We had so much to chat about. The adventure stories and tales continued non-stop for the remainder of the night.

Today we rode 45 kilometres and climbed 1,304 metres of elevation gain.

I would rate today as 8 out of 10 on the tough-o-meter. Our legs were stuffed!

All up over the 8 days, we pedalled 530 kilometres and just shy of 10,000 metres of elevation gain. I would rate the whole Tasmanian Trail 8.5 out of 10 on the tough-o-meter.

Click here for a link to day one of this Tasmanian Trail blog.