Woke up early again with the sound of the waves crashing. Sensational morning! Temperature perfect, just a gentle breeze and camp ground to myself. I kind of expected a dingo to smell my food hanging in the tree to be found loitering around but no, still no sight of a dingo!

I went straight to the beach for some sunrise photos. Wasn’t as good as Lake McKenzie! but the beach is just so soothing for the soul first thing in the morning. I made a hot chocolate and sat on the dunes watching the sun arrive. 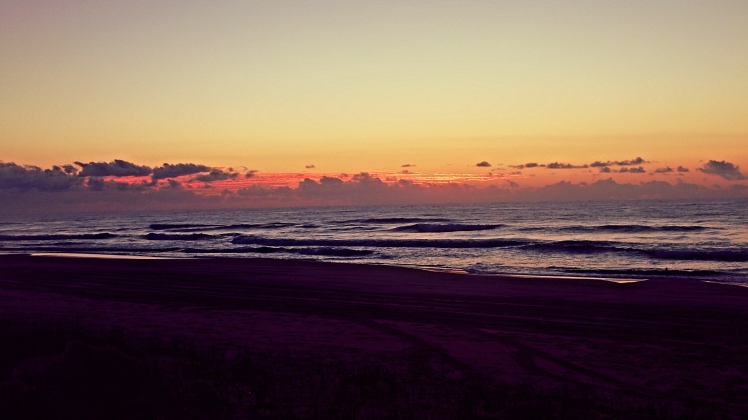 I was quite close to Dilli Village and planned on taking the ‘Jabiru Swamp’ track that starts there. This track heads South to Hook Point through the centre of the Southern end of the island. So it’s only a short stint on the beach this morning but more later to get back to Rainbow beach where my car is.

As I left I took a happy snap. Another great day!

As I rode along the beach my drive train was very dry with lots of sand built up. I remember going through Dilli Village on day one and seeing a tap. I decided to use this tap and wash the drive train down and lubricate it. It worked well but took a bit of time. I also filled my water bottles and treated the water with purification tablets.

The start of the Jabiru track was hard to find just like Eric had warned me. I got the HEMA map out (has the track on it) and compared it to my GPS position. I was close. This track takes you right to the barge at Hook Point and is about 23 kilometres long.

During the search of the track, I stumbled across this old relic.

I found the walking track signed on a wooden post. The track didn’t look good. It was really dry soft sand. It has been closed to four-wheel drives for who knows how long. This was the worse track out of the five days of my travels. It was really tough and really annoying. Some spots got so bad, I couldn’t even muscle my way through it in a low gear, the bike just sunk and stopped. I was on the side of the track battling for leaf litter or anything firmer. I found myself covering more ground than I needed by zig zaging around in search of harder ground. Its like climbing a never-ending hill, the legs are loaded up just going at walking pace. I found this a test of my mental strength. I started to curse things out loud until I told myself to get over it and just keep moving. The concern was, I need the low tide at Inskip Point and Rainbow beach so I can cruise home avoiding the sealed roads.

This was actually a better spot on the Jabiru track but still very soft. 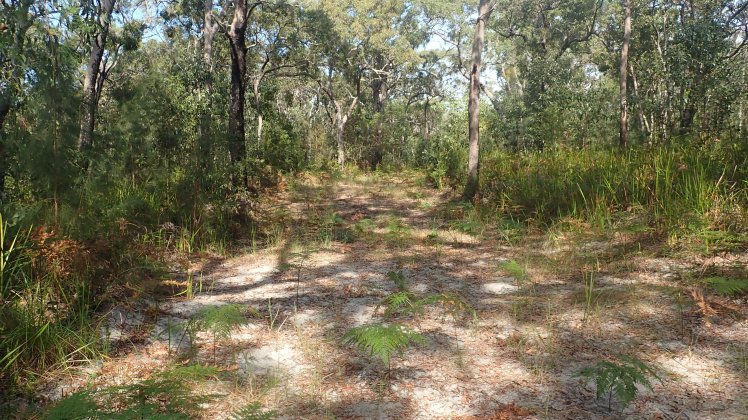 This guy was sun baking until he heard the big loud wheels crunching everything under them. He scattled off the track.

I knew there was a hikers camp ground roughly half way along so I used that as a short-term goal where I rested in the shade and restocked the energy levels.

After the hikers camp, the track got slightly firmer but started undulating and changing in elevation a lot more. Some gullies were firm enough to roll down and power up the other side. This made me happy and lifted my spirits. I was able to get the low average speed heading back upwards and save some time based on my prediction from the first half of the 23 kilometre long track.

Here you can see how overgrown it got too. This track once had vehicles on it.

There was swampy sections that normally would be annoying, but they were actually firmer than the sand!

Here is a 7 second video of me riding through a little swampy area.

Eventually after about three and a half hours I reached Hook Point. In the photo you can just see the ‘Manta Ray’ vehicle barge on the other side.

I rolled to the small queue of four-wheel drives waiting and upon a barrage of questions I sat in the shade provided by one of the four-wheel drives. Due to working hard for hours, being covered in dirt, sunscreen, sand and sweat, the shade was very pleasant indeed.

While sitting there waiting for the barge I noticed this guy crawling around in my knee hairs! His beauty struck me with awe. Wow, isn’t nature just amazing? He was struggling to get through the thick forest of hairs. It instantly reminded me of my own journey just experienced on the Jabiru Swamp track. He wasn’t giving up either!

Within minutes I was back on the barge after five days of adventure. Now I was getting sad that it was coming to an end. I will have to come back!

I love Inskip point, it’s really nice how the natural lagoons are left behind when the tide goes out. Some of them were quite deep making a great swimming spot. I was tempted to stop and swim but thought I better keep moving seen as I have a three hour drive back to Brisbane (home).

Even the seagulls were playing in the water and cooling off. 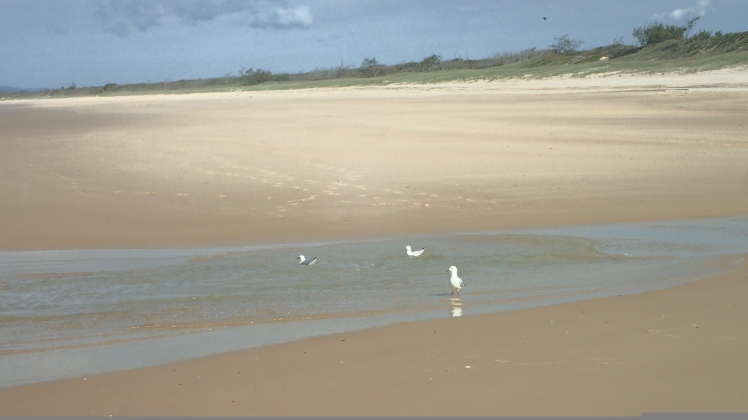 Just like yesterday, the beach riding conditions were fantastic. Just a very slight breeze and plenty of sun. I kept looking up at the coloured sand hills that were getting larger and larger.

Unfortunately my adventure was coming to an end. I was hungry and sore. All I could think of now was a juicy burger to eat with a chocolate milk from the local rainbow beach cafe.

Over the five days I covered 200 kilometres, 19 hours of pedalling and climbed 2200 metres of elevation gain with a 33 to 39kg bike. 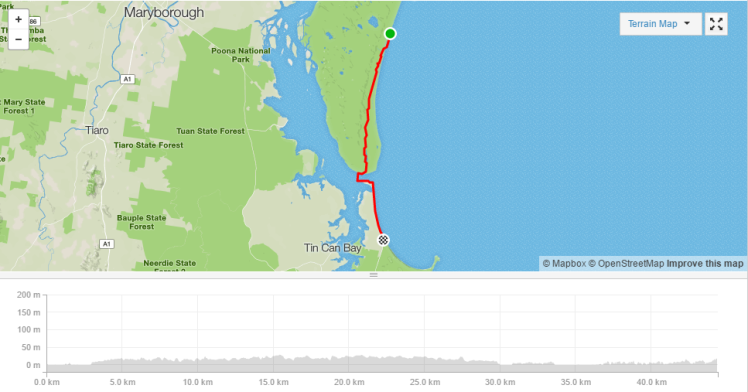 Thanks for reading my blog I hope you enjoyed it, keep an eye on the place as I write-up more adventures soon 🙂